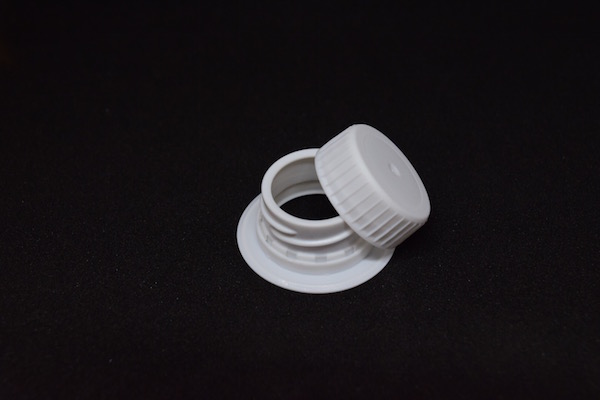 Silgan Closures is pleased to announce the availability of ELC gable top caps for cartons of all formats and sizes from 28 to 35 mm. In a recent focus group, consumers preferred the drop down tamper evidence feature. ELC provides a fitment that eliminates the pull ring in favor of a drop-down tamper band, providing visual, audible and tactile tamper evidence.

On a standard bottle finish, the A retaining bead is a rigid ring and the flexible J-band on the closure snaps under the A bead during application. Unfortunately, this standard design does not work on fitments due to the rigid A-bead on the finish causing damage to the tamper band bridges during application. Silgan’s patented design flips the J-band from the closure and puts it onto the finish using segmented flights. Using segmented flights creates a flexible A-bead on the finish, eliminating broken bridges.

ELC technology takes away the need for a removable pull ring that many consumers find problematic to open and frequently result in frustrating spilling issues. The tamper evidence of the pull ring is replaced with the traditional drop-down tamper band on the outside of the finish allowing single stage opening. In addition to improved tamper evidence, the bore seal design creates a stronger and lighter part. ELC’s thin-walled bore seal within the cap is angled slightly downwards and flexible, guiding the valve seal into the bore during capping. Plus, the flights keep caps aligned on cartons during production.

The superior bore seal technology eliminates micro leakage while maintaining fluid flow rates. The resulting seal point is positioned away from the side wall of the spout to allow access by UV light or rinsing agents. The double seal points provide oxygen transmission rates as efficient as the ring pull membrane.

The ELC 30 L at 1.90 grams is one of the lightest weight fitments on the market. “In addition to the consumer-preferred ease of opening, it has a good sustainability story,” said Bob Reay, VP of Sales and Marketing at Silgan Closures. “Consumers appreciate the controllable pouring feature, resealability and audible ‘clicking’ confirming the package is being opened for the first time.”

Silgan currently manufactures ELC fitments and supplies them to all locations within North America, Europe, Japan, Russia, Saudi Arabia and SE Asia. Silgan also supplies spuds and profiled chutes where necessary and can assist with changing nests and adjusting sorters.