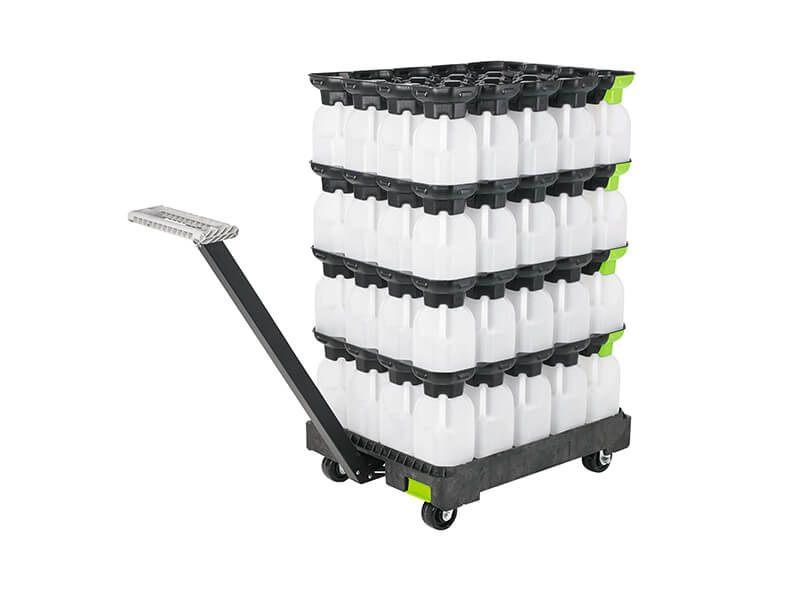 Silgan Closures, a leading designer and manufacturer of closures, ORBIS Corporation and Mid America Molds worked together in developing a “caseless” system for bottled products to replace traditional stacks of cases. The heart of the new system is the new ORBIS XpressBulk, a delivery and merchandising system that is able to move loads of bottled products without the need for them to be in cases. This significantly reduces weight during shipping and eliminates return or disposal of the cases following shelving.

Silgan collaborated in the development of this new system by providing its DBJ Series bottle closures, that not only seal the bottles, but also helps stabilize them as they are stacked on the XpressBulk contoured trays in the caseless configuration. It also partnered with Mid America Molds, which developed molds that produce light-weight plastic bottles that integrate with Silgan’s closures and the trays to help ensure the stable stacking that makes the caseless system work.

From truck to store

The XpressBulk system converts quickly from a stable system for logistical transportation to an unlocked mobile dolly to roll product from truck to store. A key feature is the ability to create secure and stable product loads that are retail ready upon arrival at the store. Also essential to the success of the system, however, is the Silgan closure that keeps bottles stable and secure whether they are locked in position in a truck or being moved into a store.

The new system resulting from this three-way collaboration was original created to meet a need for a major grocery retailer, which was making changes to its dairy space and needed a new way to move product quickly into place. A significant advantage of the system for that retailer is that it is sized to move easily through store front doors rather than only through receiving doors. This means that XpressBulk loads can enter a store and be in coolers ready for purchase within minutes.